Oh my horsefeathers, it's the last Burma news email of the semester! We're all out of classes and (mostly) done with finals! That said, there's more time to read up on what's going on in Burma! So enjoy with a glass of your favorite summer drink, have a great summer, and let's hope we all hear more come autumn!

Pressure Mounts on Energy Giant Chevron to Disclose Revenue in Burma
"When shareholders of the multinational company Chevron gather for their annual meeting in the U.S. city of Houston in late May, they will come face to face with Naing Htoo, whose community has suffered due to the exploits of the energy giant in military-ruled Burma."

The New Silk Road
Focus on that second paragraph

Burma leaders 'shed uniforms for polls'
It's a mass exodus of the army! Wait, what?

Report Highlights Lack Of Humanitarian Access To Cyclone Nargis Survivors In Myanmar
" 'Civilians in cyclone-affected areas continue to be subjected to various forms of forced labour, everyday restrictions on movements, and infringements of the rights to freedom of expression and association,' the report said."

Special Announcements! (I know I'm late, I'll explain in due time) Don't study on a Friday night: Tomorrow night starting at 8pm is CELEBRASIA 3.0!!! At the Tavern! Just $5 and you get amazing awesomeness! And SCB is tabling, how exciting is that, right?!

If you really must study, do it in the Perch. You might find a special SCB surprise :)

Burma explosions leave nine dead
"Bombs planted near Rangoon firms with ties to junta as country prepares for first elections since 1990"
http://english.ntdtv.com/ntdtv_en/ns_asia/2010-04-16/673267148490.html
(if you prefer poor video, enjoy)
New South Wales Will Not Acknowledge Burma's Election
Not all of Australia, just the cool part

Series of explosions reported at hydroelectric project in Burma
Just what we needed, more explosions

Burma's hip-hop resistance spreads message of freedom
"Thxa Soe's music gives country's youth a focus for dissatisfaction with the junta despite strict censorship"
(This was cool!)

Burmese spam is probably spicier than ours

So I opened the AU Burma email address and saw a notice that the blog got a comment! It was spam. Not cool.

Locking down N-supplies
A Bangkok editorial on the DC nuclear summit thing, check out the bottom paragraphs

Burma Opposition Apologizes for Failing to Achieve Democracy
Let's imagine this. The NLD comes up to the podium: We're sorry we can't establish a free nation while our government is killing off its citizens and torturing opposition (aka, us).

Burmese music: Sound of the underground
Good article, but don't click the links, they don't actually go to the music described here (sadly!)

Burma Action Week was AMAZING! Thank you guys for coming and participating and helping and just showing general support! You are also amazing! And we should have lots of money for Burmese refugees! If you want notes from our most recent meeting (including upcoming events) email us!

Burma Action Week is half way through! Wow, guys, and it's cool! Have you seen ALL of those popsicles? (either on the Quad Monday or the beach until Thursday) And how about those awesome t-shirts of awesomeness? But best so far was tonight's coffee house/open mic night, including the performance of a recent alt-breaker/Burmanator, Thomas Qian! Who was awesome! Clap at your computer because it was that cool (I'll get some pics up on facebook soon if you couldn't come).

Burma’s largest opposition party to boycott 2010 election
Is it really a boycott if it's not a fair election?

Child Displacement in Burma Documented
"Based on the Thai-Burmese border, the Free Burma Rangers (FBR) and Partners released its findings in a report titled “Displaced Childhoods,” which chronicles conflict areas in eastern Burma."

And in case you didn't know (because I forgot to mention it) SCB joined protesters a week or so ago outside the SPDC attache's place in DC as they were throwing a big dinner party. There are pics on facebook, you should look for them!

And a little plug: I wanna co-lead the Thai/Burma alt-break next winter break. Would anyone be interested in co-leading? Contact sumka@american.edu (Shoshanna Sumka, head of the alt-break program)! Because I really don't wanna do it alone.

Best travels folks! Come to the Burma panel discussion Thursday, noon, McKinley 101! It's gonna be awesome and I am gonna enjoy that tea-leaf salad!!! Wheeeee!!!!!

Burma Action Week: One of many events!

The above link is to one event of many that SCB is planning for our very own Burma Action Week, starting Monday!
Posted by AU Student Campaign for Burma at 4:40 PM 94 comments:

Heya guys! Burma Action Week (bi-week?) is starting up next week and I need volunteers to "color" a LOT (2200) of popsicle sticks red (with ribbon, markers, colored paper, anything) between now and Monday morning (EARLY) when we will flag the quad (a specific section, which I'll go over with volunteers). Monday night we'll have to move them to the McKinley Green for Campus Beautification Day, where they will stay until Wednesday night. Contact me at al3281a@student.american.edu please!

Who is at the heart of Burma's junta?
Meet the rulers of the SPDC!

Burma: Part of a Balanced Breakfast!

Howdy folks! We've made it to what I call 'prefinals season,' when everyone wants to be outdoors and we're all gonna die if we dare enjoy the nice weather. So take a break! Keep informed! Burma news is good for your health!

For democracy activist Nyi Nyi Aung, homecoming is bittersweet
"Just eight days ago, Nyi Nyi Aung didn't know whether he would live to see his home again. Imprisoned in the Burmese jungle, he'd been beaten, forced to sleep in a kennel in his own excrement, denied medical treatment and told by captors that his U.S. citizenship didn't matter."

Time for your Irish Coffee! Toodles! 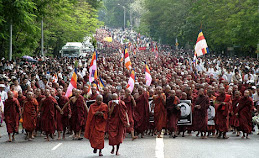 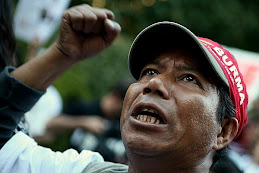